Being Humble While Remaining Confident

One of the hardest parts of being a school leader is remaining humble and in-tune with the people you are leading. In this article, Marc Daneault, a Nanaimo-Ladysmith Vice-Principal relates a story in which practicing humility helped him make a breakthrough. As a great band once sang, “Once in a while you get shown the light, in the strangest of places if you look at things right.”

“As a leader, it is important to be humble and yet remain confident.” – Anthony MacKay

As a VP, one of my tasks is recess supervision. Exclusively, I supervise the blacktop area of our school. Picture cracked concrete, loose gravel around the edges, puddles and rusted basketball hoops. Most students avoid the blacktop area because it presents little to do and is visually unappealing. However, every recess some choose to go there and in particular 10-15 behaviorally challenged boys, ages 9-11, converge on it to do what behaviorally challenged boys often do together: cuss, destroy things, physically attack one another. One boy in particular, Dylan, is one of those boys. And on one particular day, I had to call him out for repeatedly trying to kick another boy’s soccer ball on the roof, after several warnings to be careful of course. I eventually felt it necessary to confiscate the soccer ball, to the other boy’s disappointment. Understanding how he must have felt, I promised myself I would return the other boy’s soccer ball by the end of the day.

When school was over, I went out to the back field to return the boy his ball, where he was playing with Dylan and several other boys. Dylan’s grandmother was standing on the other side of the fence, a distance away and called me over.

“What was that about?” she asked.

“I was giving Anthony back his soccer ball and I asked Dylan if he could make an effort to act more respectfully during recess.”

She rolled her eyes and nodded, “Well maybe he would act more respectfully towards you if you respected him.”

I was taken aback. Was she actually accusing me of being disrespectful towards her ill-behaved grandson? Me? I immediately recalled several times where I overlooked and ignored his behaviour.

“What do you mean by that, Dawn?” I asked. Her accusation had me upset and defensive.

“Well, I hear the stories at home. I hear about how you single him out and let others get away with stuff.”

Single him out? Preposterous! If anything he’s the one I let get away with things, otherwise I would be calling his mother daily.

“I’m sorry to hear he feels that way, Dawn, but every day I have to talk to him about swearing and hurting others. I don’t think I’m ever disrespectful,” I replied.

Again, she rolled her eyes and nodded her head. “Well, that’s not how we see it,” she answered, then walked to her car.

Offended and speechless, I went back inside the school, reliving the exchange in my head.

After going inside, I felt compelled to tell the story to several colleagues. How could I, the friendliest guy ever, possibly be labeled “disrespectful”? What garbage! Especially by a family with children who routinely fill our school with profane language and dysregulated behaviours? The injustice of it! The ignorance of it. I’m the fairest, most patient guy around. Everyone who heard my story took my side. I was looking for vindication and found it easily among my colleagues.

I was looking for vindication and found it easily among my colleagues.

Three hours later, having put my kids to bed, I was washing the dishes and reliving the exchange in my head. Dawn’s comments had touched a nerve. Was there truth to what she had said? Had I been disrespectful to him? I dug. No, actually I hadn’t. His grandmother had no idea the number of sidebar conversations I’ve had with him, the patience I’ve exercised towards him daily. So, if I was totally confident in how I treated Dylan, I must be bothered for another reason. What was it?

It took three days. Three days of reliving the exchange with Dawn through the fence. Finally, while helping my son deliver newspapers, what was bugging me about the situation became clear. One of the families I am being trusted to serve and advocate for was sharing that in their household I am seen as disrespectful. I had failed the people I had been asked to serve. I couldn’t live with that. I could either hear that and argue with them, or I could hear that and figure out how to fix it. Choosing the latter, which is what a true leader should do, would mean humbling myself; putting aside my defences and hearing their words.

I had failed the people I had been asked to serve. I couldn’t live with that.

Once I had made that realization, I was then able to reflect about how I could do things differently with Dylan. I recalled that people who suffer trauma often experience “persecution syndrome”, thinking everything is against them. Dylan had witnessed plenty of abuse. Dylan had grown up never knowing his father. Dylan needed understanding. Maybe he doesn’t like that I holler his name out when he acts inappropriately. I would try to do that less. Maybe he’s bored out there and needs some new playground equipment. When was the last time I said a compliment or positive comment to him? I couldn’t recall. Maybe never. I would compliment him more, starting now. Once humbled and off my high horse, I was able to think of ways to adjust my practice and work towards a better relationship with Dylan.
A couple weeks later Dawn was standing by the school entrance around 2pm, picking up her grandkids early. I seized the opportunity.

When was the last time I said a compliment or positive comment to him? I couldn’t recall. Maybe never.

“Hey Dawn, I was thinking about what you said the other day about my appearing disrespectful.”

“Yes?” she answered guardedly. She was probably expecting an argument.

“After that, I reflected on how I act towards Dylan. You’re right. Maybe some of the ways I interact with him may make him feel disrespected. I apologize for that. I’m going to try and act differently towards him from now on. I don’t want him feeling disrespected here”.

Her face lit up with a smile. “He really is a nice boy Mr. D. He just needs understanding and more patience than other kids. Thank you for saying that!”

I walked away from that exchange feeling way more victorious than the first one even though no one had been ‘put in their place’. And unlike before, I didn’t feel compelled to go colleague to colleague retelling it. I guess boasting of one’s victory over oneself just doesn’t have the same ring. Instead, I wandered off down the hall thinking of how complex this job of leader really is and how opportunities for growth can come when you least expect them.

I wandered off down the hall thinking of how complex this job of leader really is and how opportunities for growth can come when you least expect them.

Mr. Mackay’s talk came about 5 days after that playground incident. The taste of humble pie was still fresh in my mouth. But my confidence in myself as a leader was stronger than before. When he said that “To be a leader, you must be able to be humble and yet remain confident” it resonated loud and true for me. Yes, you really do. I hope that in the future I can remain open to catching those moments to practice humbleness.

Oh, and Dylan and I do have a better relationship now. Not perfect … but better. 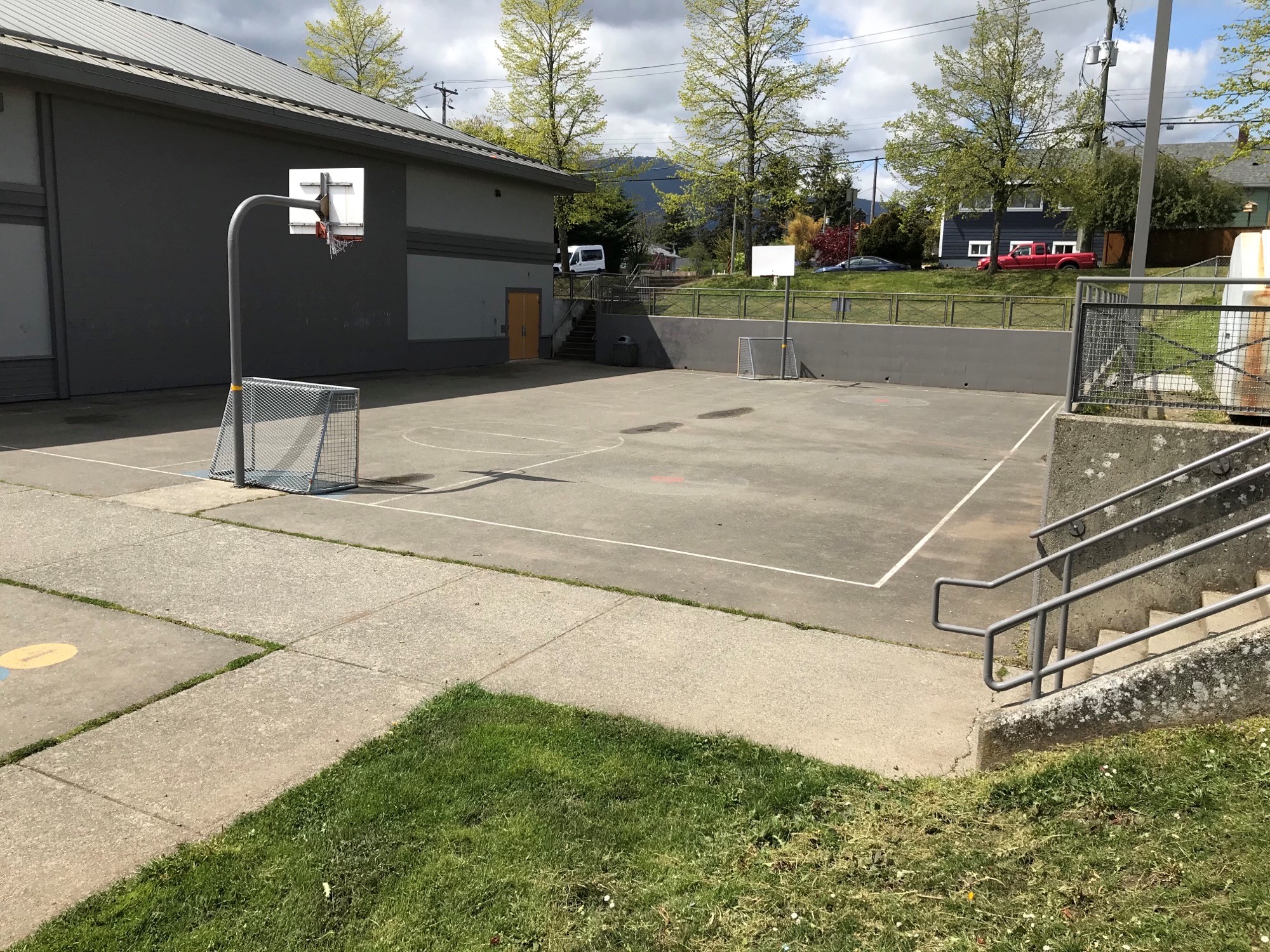 Image of the basketball court.

I was born and raised in Pitt Meadows. I attended North Island College (Courtenay, BC) and then graduated from UNBC (Prince George). I completed my B.Ed at UBC and then spent 10 years teaching abroad at BC Offshore schools. I joined the Nanaimo-Ladysmith school district in 2018. SD 68's motto is "Success for All" and it is something I strongly believe in. I am currently a student in UBC's Transitional Educational Leadership program.

Subscribe to get the latest information on TELP and the bi-annual TEL Journal sent right to your inbox!